November inflation data, released this morning by Statistics Canada, points to some unexpected economic weakness and reinforces the Bank of Canada’s intention to leave rates unchanged despite recent tightening south of the border. The all-items indexed declined by 0.4% in November, after rising 0.2% in October. With seasonal adjustments, the monthly decline was only 0.2% but expectations were for seasonally adjusted growth of 0.2%. The graph below shows the reversal in seasonally adjusted monthly numbers. 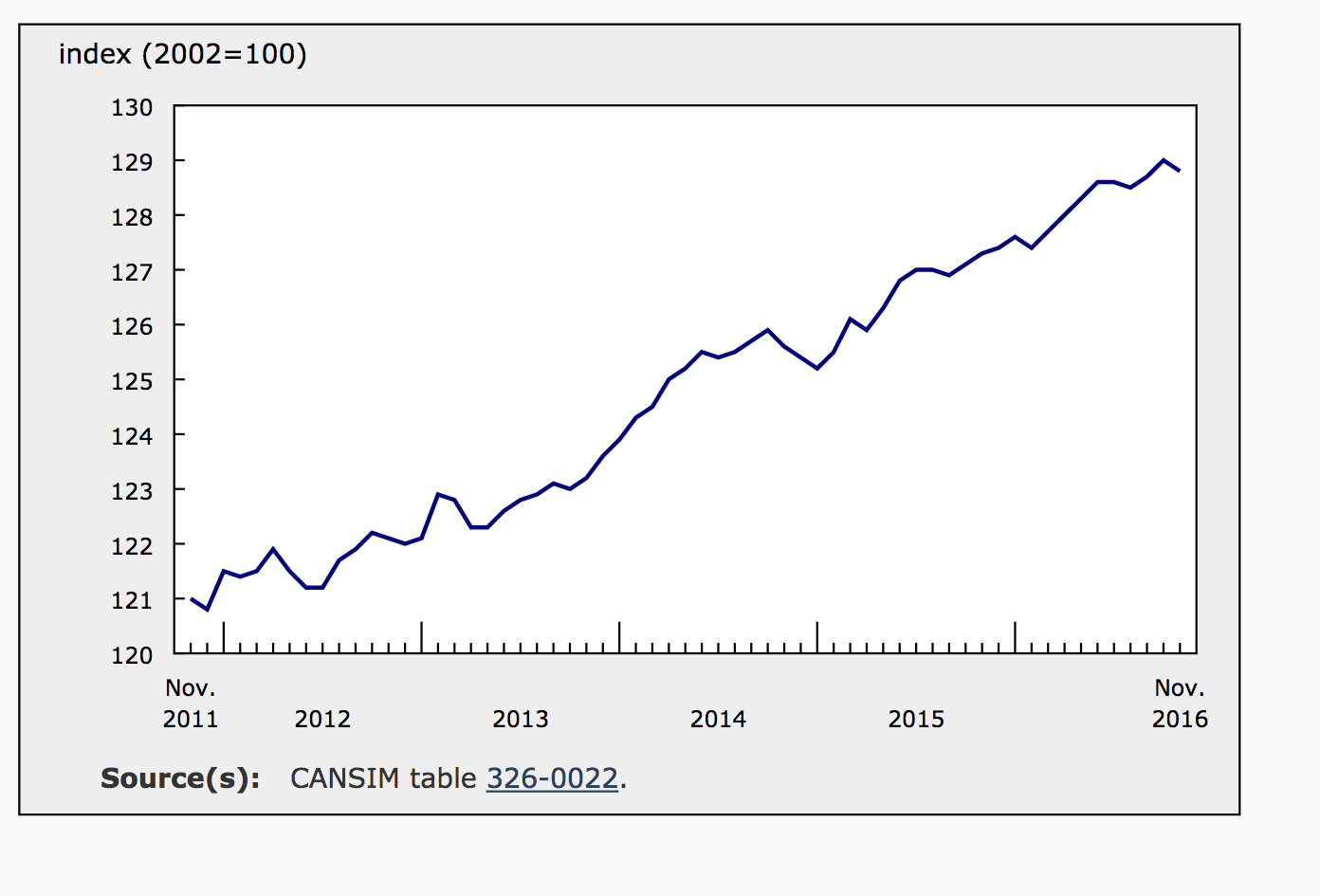 Food prices recorded their first monthly increase since February to bolster inflation in November. The food index was up 0.5% over the month including 0.7% growth in the grocery store index and 0.2% growth in the index for food from restaurants. The vegetable index added 6% in November and the fruit index climbed 3%, clearly reversing the downward trend in food prices over the past year.

Shelter prices were a major contributor to annual inflation in November, up 2.1% year-over-year and accelerating from 1.9% in October. The index for homeowners replacement costs gained an annual 4.4%, reflecting the appreciation of property values. Electricity prices pushed 3.5% higher for the year and also contributed significantly to growth in the shelter index.

Higher transportation costs added to inflation for the year as well, that index was up 1.4% despite a 1.7% decline in the price of gasoline. Prices for the purchase of passenger vehicles, up an annual 3%, were the main driver of growth in the transportation index. The energy index inched up just 0.2% year-over-year in November, after posting a 2.5% annual growth rate in October.

The index for recreation, education and reading gained 2.1% annually in November. This component of consumer spending accounts for about 11% of the all-items index and therefore contributed 0.2% to November’s annual inflation number. The index for household operations, furnishings and equipment also bolstered the CPI by 0.2% over the year. This index rose 1.5% and accounts for approximately 13% of the all-items indexed.

The price of food was down on an annual basis for the second consecutive month, falling 0.7% in November to match the decline in October. The price of food purchased from stores continued to slide on an annual basis, while the index for food purchase from restaurants continued moving higher. At the grocery store, prices fell 2% year-over-year with fresh fruits, vegetables and meat prices posting the most significant drops. In contrast, the price of food from restaurants was reportedly 2.5% higher in November compared to a year earlier.

The core index was up 1.5% year-over-year but down from 1.7% in October. Also, the index measuring the price of goods inched up just 0.3% over the relevant year, while the index for services jumped 2%.

Inflation in the Provinces Varies

For the year ending in November, inflation was highly inequitable across the provinces. The all-items index for Newfoundland and Labrador climbed 3.6%, while prices in Saskatchewan posted no change. Prices were down in every province in November compared to October. 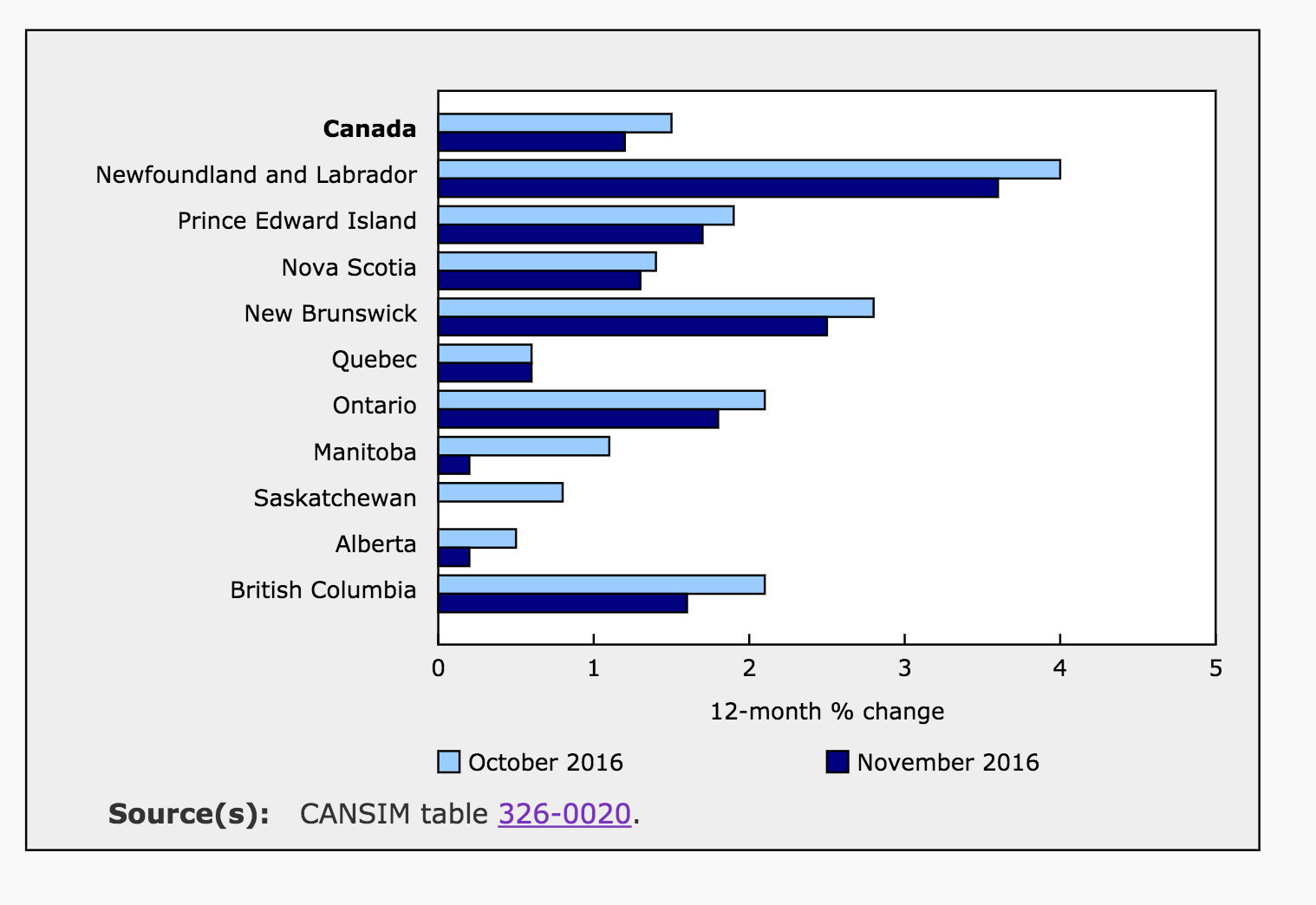 Inflation slowed in every province in December. The smallest monthly decline was in PEI where the all-items index only fell by 0.1%. Prices slid the most (down 1.2%) in Manitoba and Saskatchewan posted the second-largest decline, down 0.8% for the month.

Mortgage rates and other borrowing costs in Canada have started rising as a result of recent tightening by the Federal Reserve and Canada’s close ties to the US economy. However, the Bank of Canada has explicitly stated that monetary policy in Canada is independent of our closest trading partner and the policy will be strictly based on the Bank’s 2% inflation target. Today’s inflation report reinforces the fact that Canada’s economy is not ready for higher interest rates.

In their December 7th meeting, the Bank of Canada left rates unchanged at 0.5%, as was expected. They meet next on January 18th and it is very unlikely that they will make any changes to the overnight rate in the short-term. Although November’s inflation numbers were disappointing, the core index has been trending close to 2% and expectations are for inflation to move closer to its target over the next year although clearly there is still significant slack in the economy.

The Bank of Canada published three new measures of core inflation this month following a recent review of core measurements. Core inflation numbers are important to the Bank’s policy decisions as they are designed to better reflect underlying price pressure by eliminating highly volatile items. More information on these new statistics can be found at the Statistics Canada website.