At 2.1%, headline inflation surpassed the Bank of Canada’s 2% target in January for the first time since October 2014. Today’s report from Statistics Canada showed that inflation in January was significantly more than anticipated. Markets predicted only 1.6% year-over-year growth in consumer prices. In December, the annual inflation rate was just 1.5%. A significant amount of the spike in inflation can be attributed to higher gas prices. Excluding gasoline, the CPI-U was up 1.5% annually. Over the month, prices rose 0.9%, well above expectations of only 0.3%. Core inflation was 0.5% in January after declining in both November and December.

In January, the all-items indexed added 0.9% as prices were higher in every major component of the CPI-U, except for clothing and footwear. That index declined 0.9% month-over-month, including a 2.2% drop in footwear costs. The transportation index climbed in January, up 2.8% as gas prices skyrocketed. The energy index, which includes gasoline, jumped 4.5% in January, following 1.6% growth in December. Excluding energy, prices were up 0.6% on monthly basis.

The food index was up 0.6% in January after posting no monthly change in December. Prices at the grocery store increased more than the price of food at restaurants. This has not been the trend over the past year. The index for food from stores has been volatile and mostly declining, while the index for food purchased from restaurants has grown slowly and consistently. 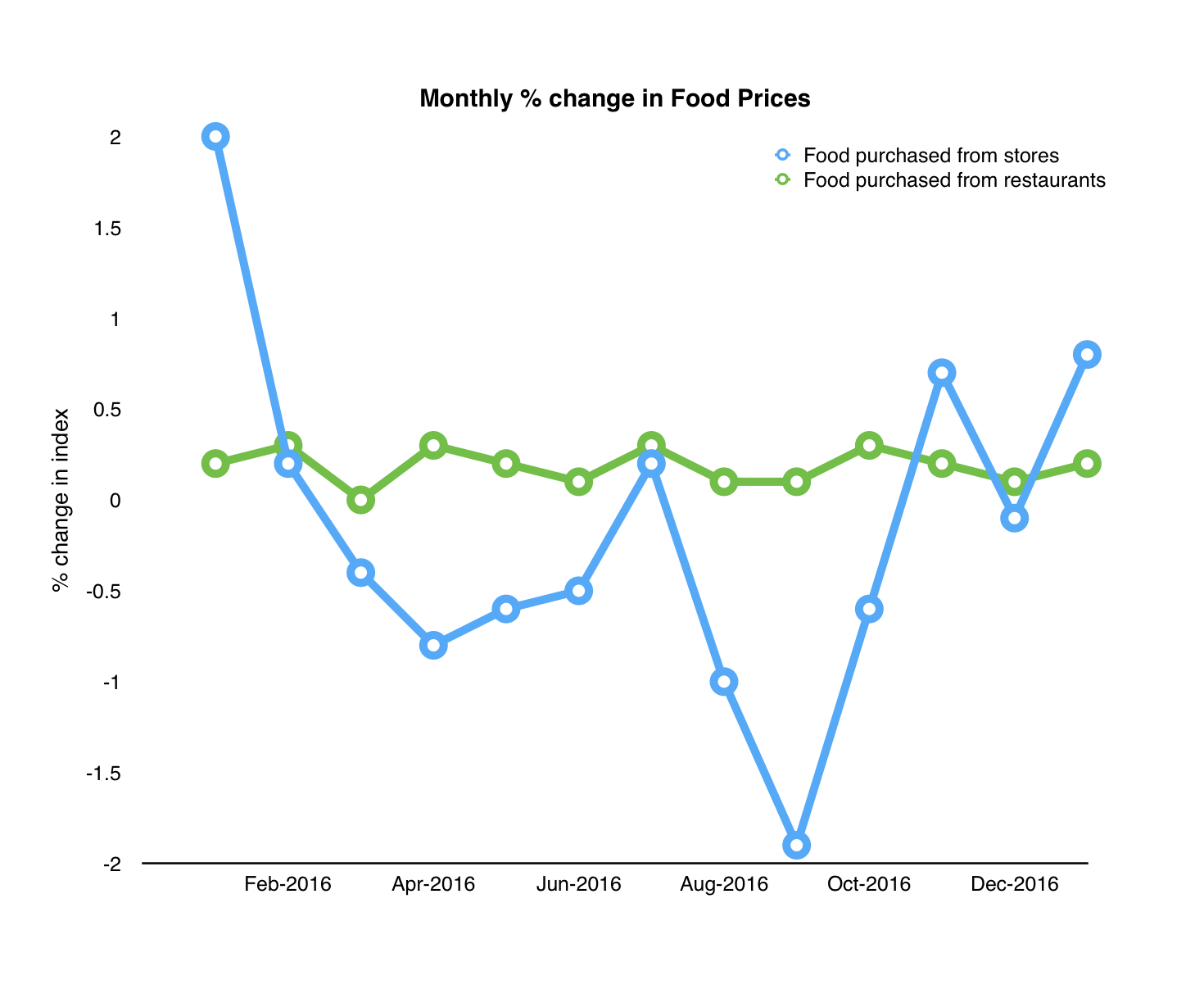 January saw a large discrepancy between inflation in the price of goods compared to services. Goods, which account for 45.3% of the all-items index, posted a monthly increase of 1.3%, while the index for services rose 0.5%. However, within the goods index, there was a large amount of variation. The indexes for durable goods and non-durable goods were both higher, 1.6% and 1.7% respectively. Meanwhile, the index for semi-durable goods declined 0.7% in January. Semi-durable goods are defined as those that may or may not last for 12 months, such as clothing, footwear and household textiles. 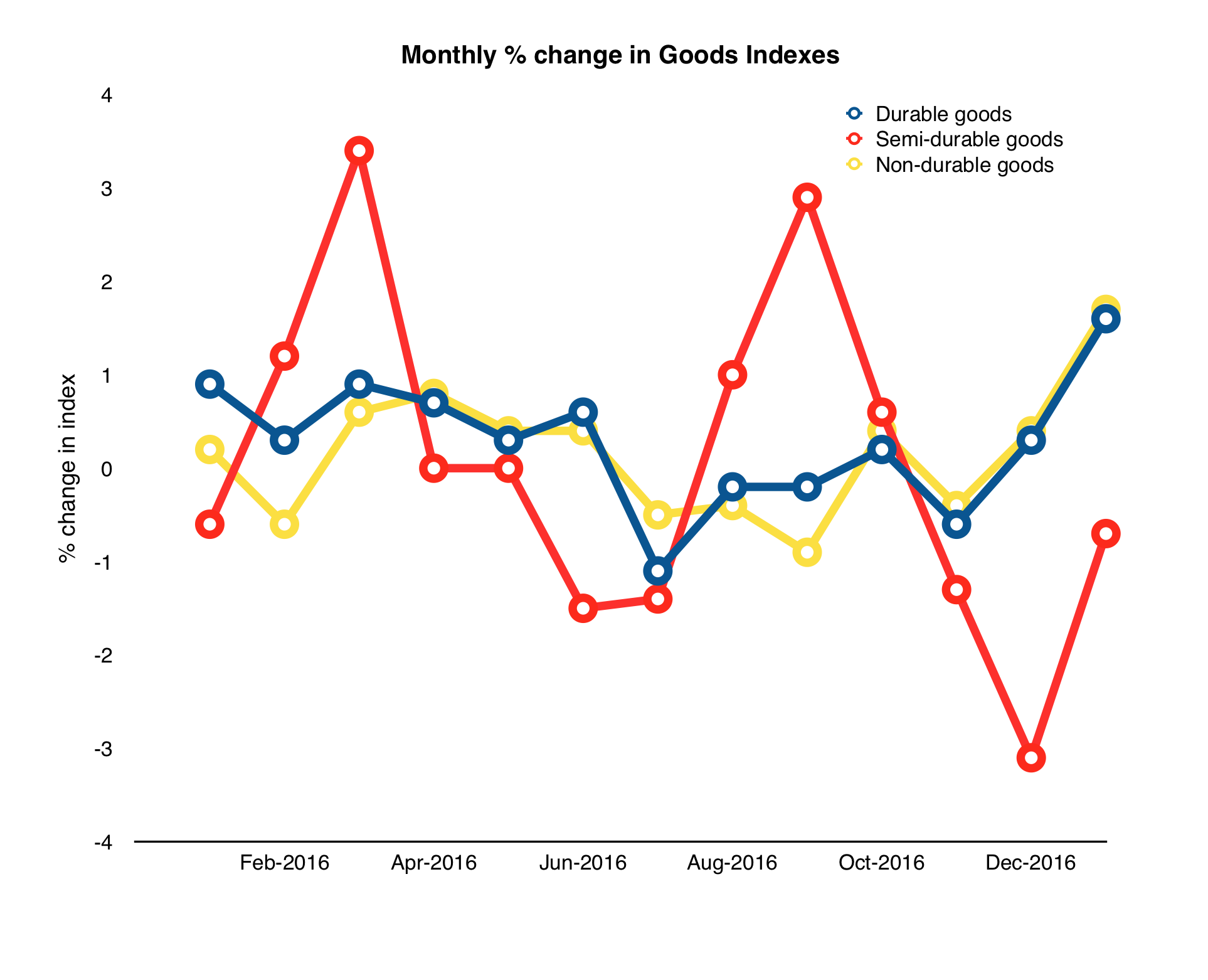 With seasonal adjustments, the all-items index rose 0.7% in January, up from 0.4% in December; and the core index climbed 0.4% in January, compared to 0.2% in December. The Seasonally adjusted transportation index increased 2.1% January, a far larger move than any other major component of the all-items index. The adjusted index for recreation, education and reading grew significantly in January, up 1.4%. Meanwhile, the price of food fell 0.2% with seasonal adjustments, after remaining flat in both November and December. Seasonally adjusted clothing prices were down 0.1% on a monthly basis.

The food index fell 2.1% in January compared to a year earlier and was the only component of the all-items index to decline on an annual basis. The discrepancy between the prices for food at home and food away from home was apparent in the annual numbers. At the grocery store, prices were down 4% year-over-year, including a 15.5% decline in the fresh vegetable index and a 10.8% decline in the index for fresh fruit. In comparison, the index for food purchased from restaurants grew 2.3% over the same year. 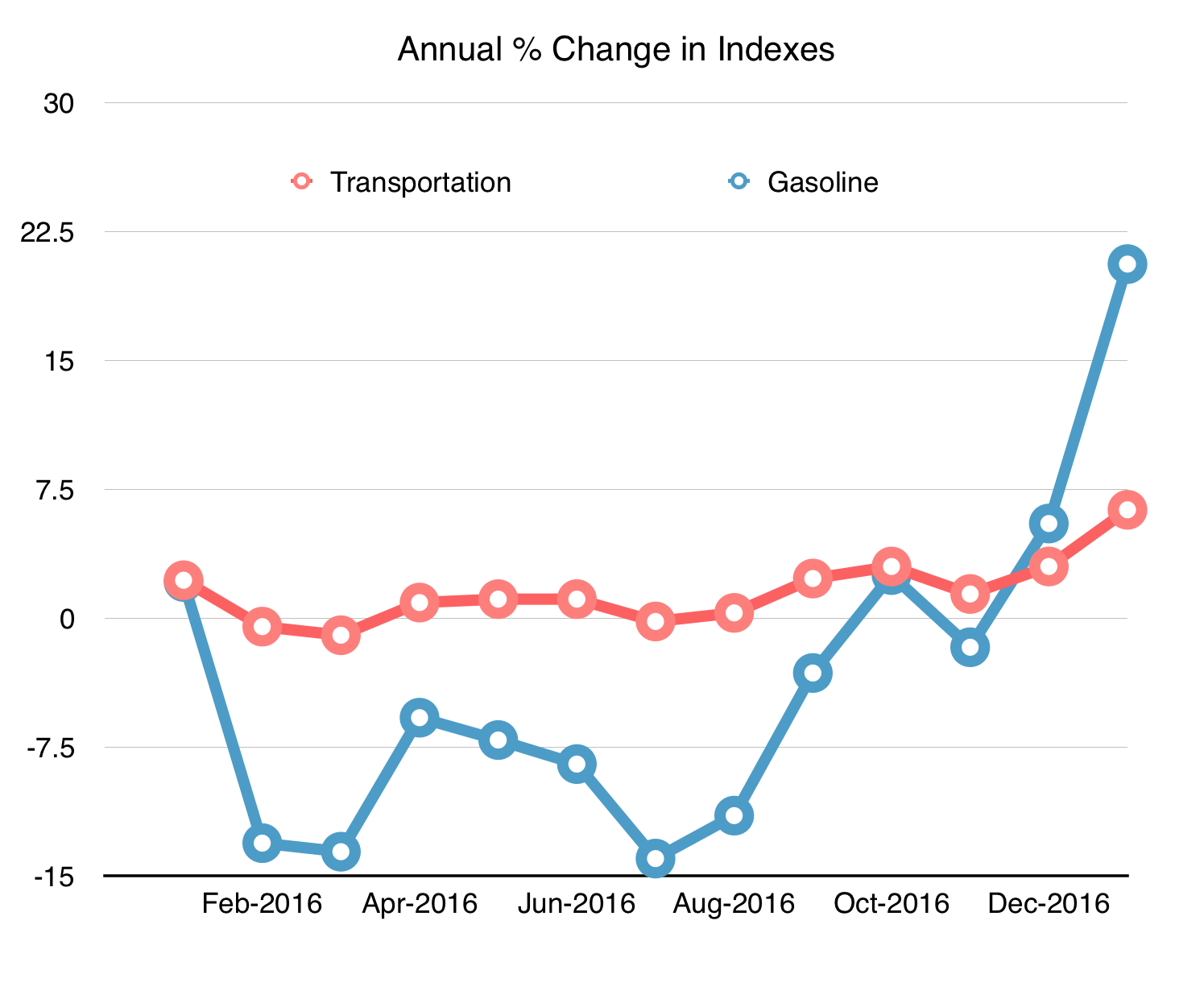 The transportation index posted by far the largest annual increase of the major components, up 6.2% year-over-year. Gasoline prices climbed a whopping 20.6% over that period. Other components of the energy index were also sharply higher, including natural gas and fuel oil up 15.6% and 18.3%.

With gas prices up across the country, inflation was higher in every province in January compared to December on an annual basis. Once again, Newfoundland Labrador saw significantly higher inflation compared to the rest of the country, largely the result of new consumption taxes.

In Alberta, the price of gasoline increase more than in most other provinces, up 33.9% year-over-year. A new tax as of January 1 added $0.49/L to prices at at the pump in that province. 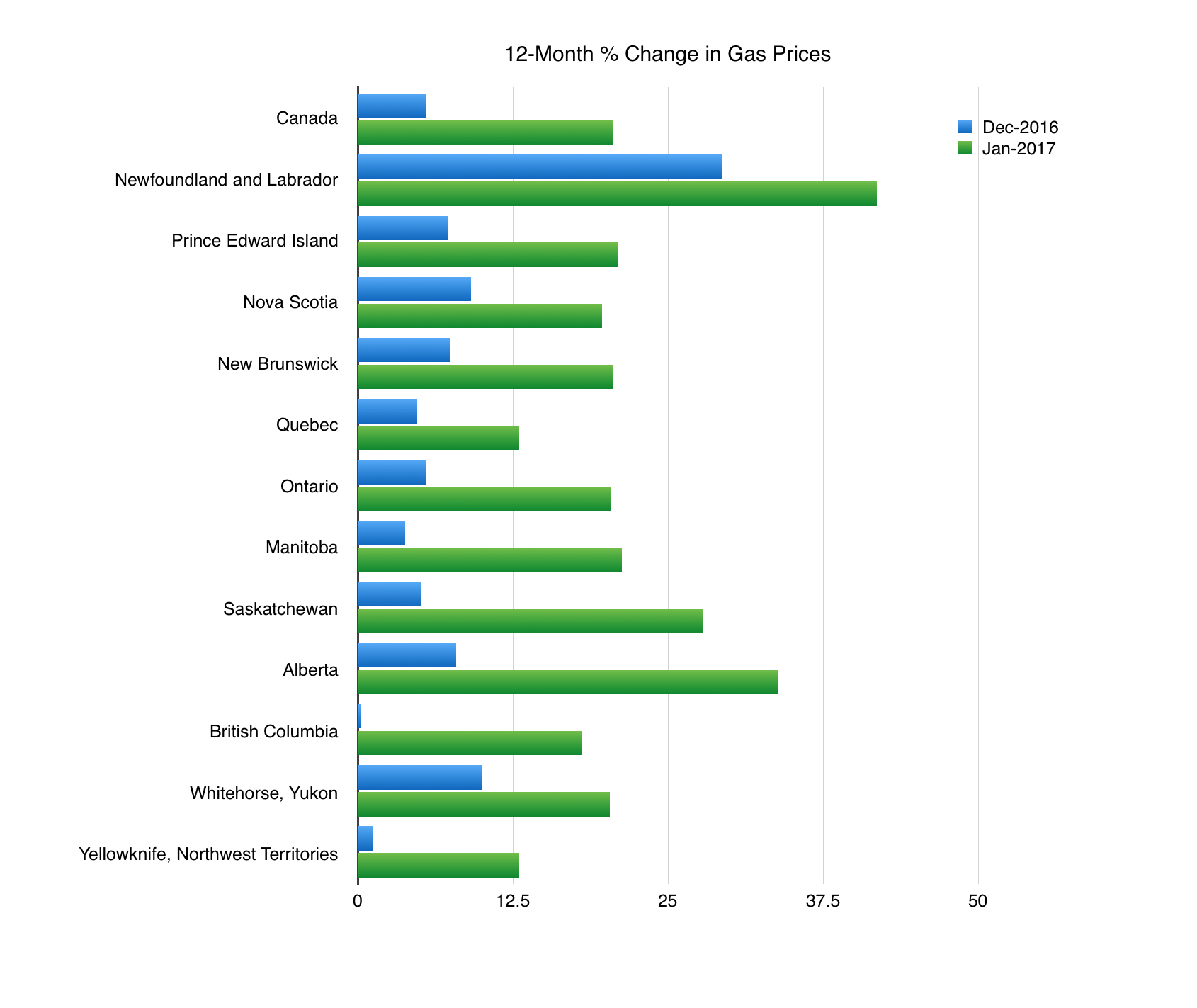 Earlier this month, the deputy governor of the Bank of Canada gave a speech entitled ‘getting to the core of inflation‘ at Western University. In this address, he upholds the 2% target for inflation as still appropriate to guide monetary policy. He also discusses various options for measuring core inflation and the importance of the core reading.

On January 18, The Bank of Canada maintained its target for the overnight rate at 0.5% and the next announcement is scheduled for March 1. The Bank sees signs of growth in the global economy as commodity prices, including oil, move higher. However, uncertainty is high around US trade policies, which have far reaching impacts. Canada’s economy appears to contain some ‘excess capacity,’ meaning there is room to grow and no need to raise rates. Monetary policy in Canada is largely expected to remain accommodative despite expectations that the Fed is will raise interest rates this year.

The BOC projects real GDP growth of 2.1% in both 2017 and 2018 and sees inflation “moving closer to the 2% target in the months ahead and remaining there throughout the projection horizon while excess capacity is being absorbed.” Today’s report brings the data in-line with their projections earlier than anticipated.