The Consumer Price Index edged up 4.7% in October on a year-over-year basis, after the 4.4% rise seen the previous month reported Statistics Canada today. This marks the largest percentage increase since February 2003.

“Inflation is often driven by higher prices for day-to-day basics, such as putting a roof over our heads, buying food, and getting around. These three elements alone nationally account for 62.5% of our monthly “basket” of spending. Prices are currently rising for all three and, therefore, are affecting us all to a greater or lesser degree, depending on where we live, our lifestyle choices, and personal circumstances,” explained Statistics Canada in its monthly report.

Excluding the energy index, the CPI increased 3.3% since this time last year – the same percentage gain seen last month. In October, on a monthly basis the CPI edged up 0.7%, “the largest gain since June 2020 (+0.8%), when energy prices began to recover following steep declines during the early months of the pandemic,” stated Stats Can.

On a seasonally adjusted monthly basis, the percentage increased by 0.5%. 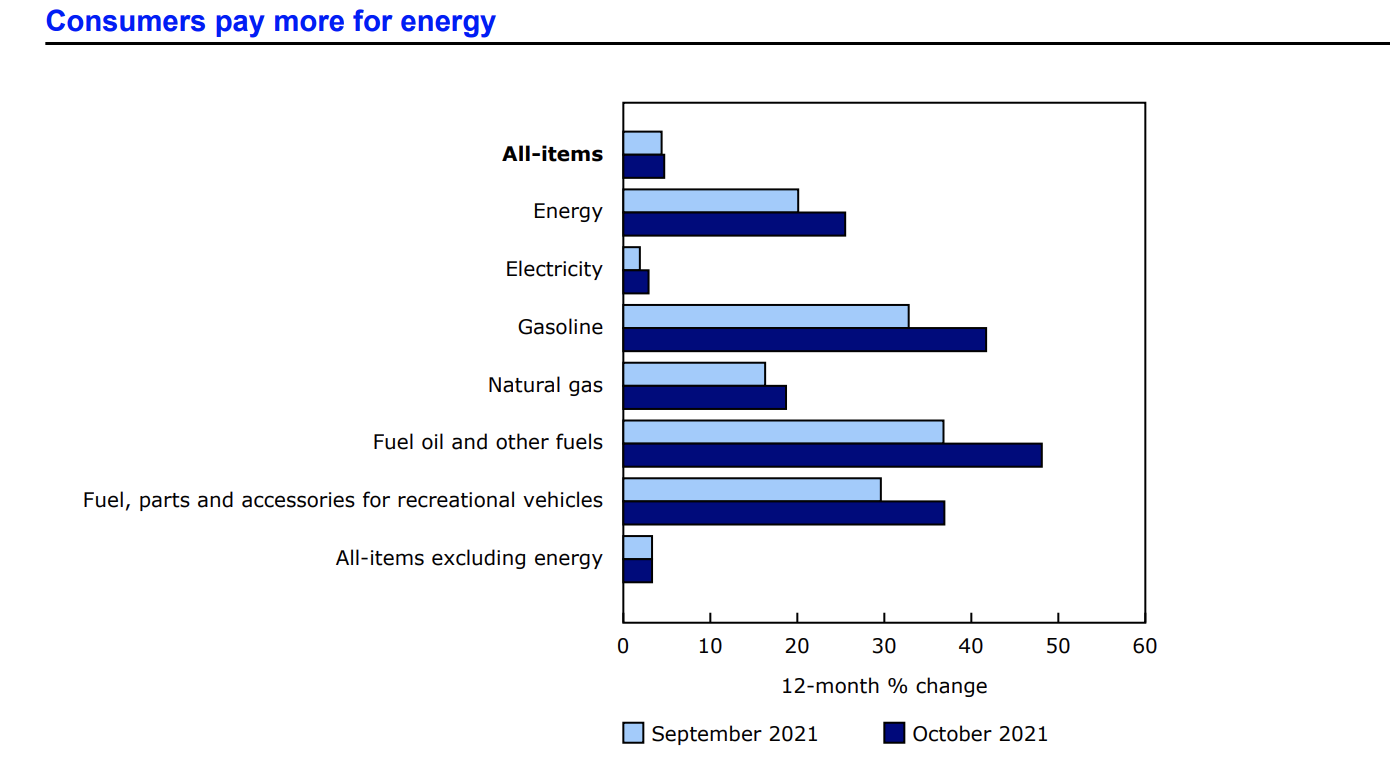 “Shortages in other energy sources, such as coal and natural gas, led major economies to use more oil for power generation. This contributed to higher prices at the pump,” explained the agency in its report.

Additionally, other composite energy indexes also saw percentage increases including the fuel oil and other fuels index which soared 48.1%, and the natural gas index which increased 18.7% since this time last year. 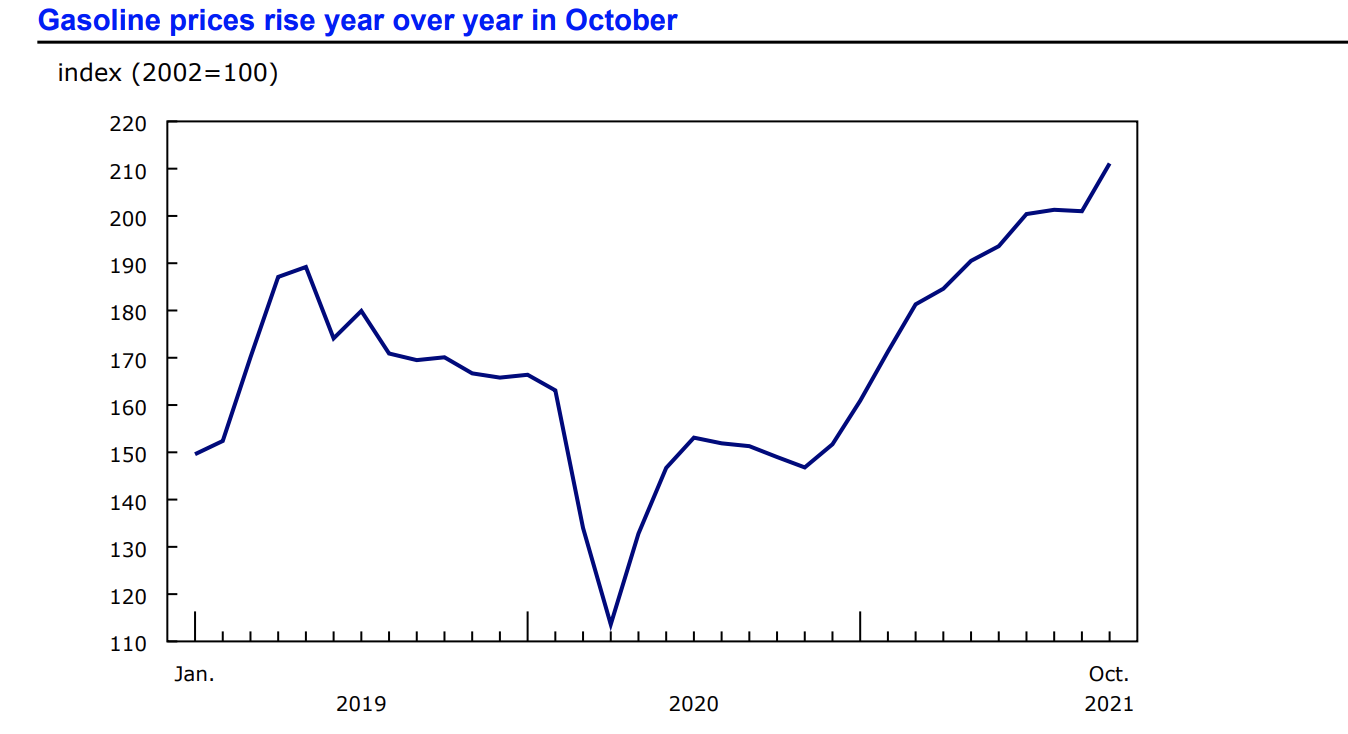 “Prices for meat products (+9.9%) continued to rise in October, as fresh or frozen beef (+14.0%) and processed meat (+8.5%), which includes bacon (+20.2%), put upward pressure on prices. Labour shortages that have slowed down production, ongoing supply chain challenges, and rising prices for livestock feed continued to factor into higher prices for meat,” explained Stats Can. 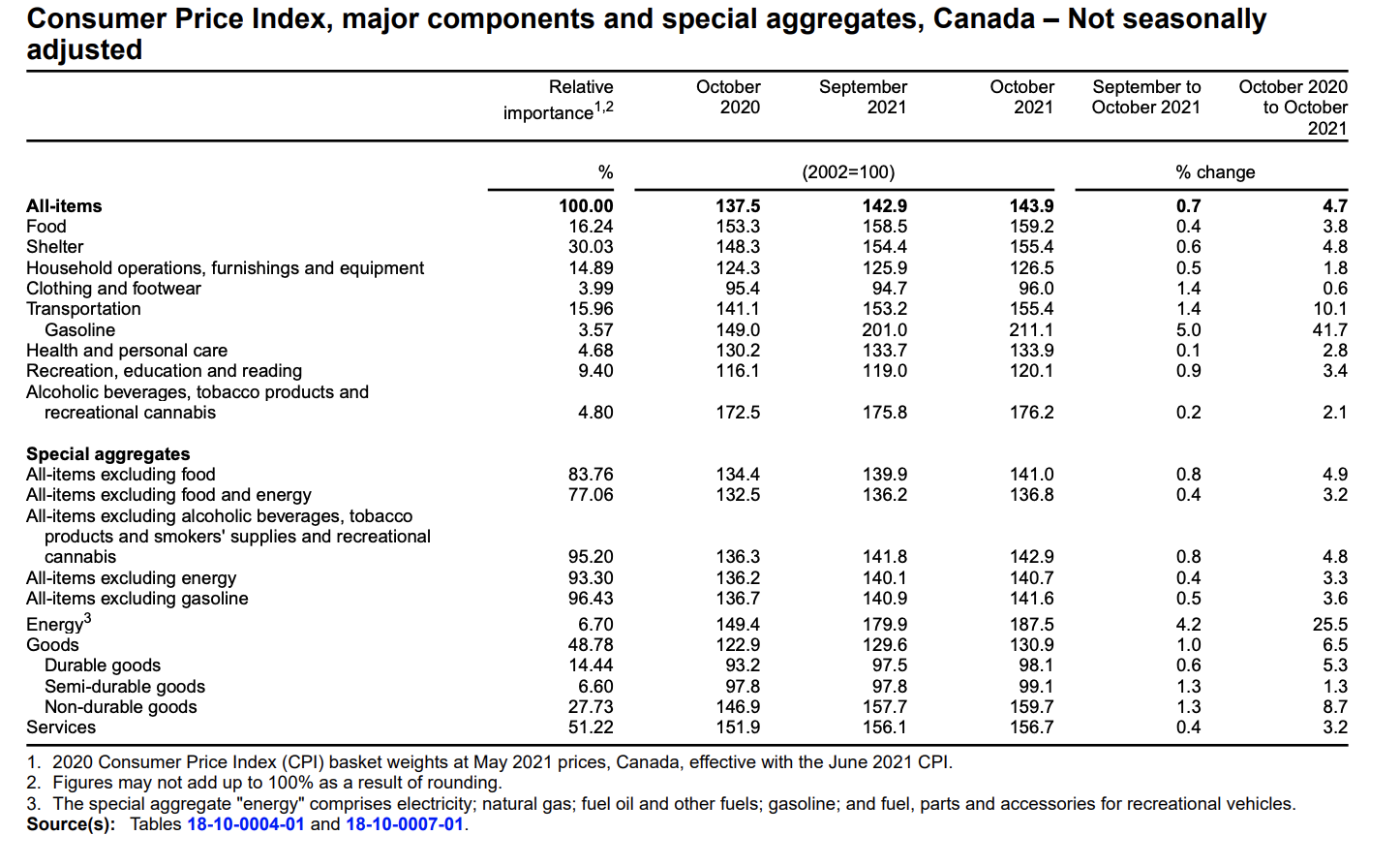 Year-over-year, the shelter index rose 4.8% in October. Apropos of composite indexes, the homeowners’ replacement cost index, which is correlated to the new home prices, increased 13.5% year-over-year. Likewise, Canadians in some of the Maritime provinces paid more for rent.

“Among the eastern provinces, rent prices rose year over year in Prince Edward Island (+7.6%) in October. Higher demand arising from the migration of Canadians to the eastern provinces may have contributed to the price gain. Rent prices also increased in Nova Scotia (+7.1%) and New Brunswick (+9.4%). In contrast, rent prices in Newfoundland and Labrador fell 2.3% year over year,” stated the agency in its report.

Statistics Canada released a special statement regarding property taxes across the country:

“Property taxes are an ongoing cost of homeownership in Canada and are the main source of revenue for many municipalities. They are collected by municipalities to cover the cost of a variety of services.

Property taxes and other special charges, which are updated annually in the October Consumer Price Index (CPI), are determined by four factors: the assessed value of homes, municipal and provincial tax rates, charges levied by municipalities for specific services such as garbage collection, and homeowner tax rebates.

In British Columbia, property taxes rose in part because of higher assessment values.

In Ontario, higher tax and sewer rates, set to cover rising costs of existing services and infrastructure projects, contributed to the increase.

The decline in property taxes in Manitoba, which is the largest on record for that province, was largely attributable to the introduction of a new education tax rebate.

In Alberta, lower assessment values contributed to the decline in property taxes.

Property taxes increased in Nova Scotia (+2.7%) and New Brunswick (+2.4%), after posting growth of 1.1% and 0.5%, respectively, in 2020. Higher assessment values, which were a result of strong demand for houses in Atlantic Canada, as more Canadians moved to the region, contributed to the increases. Homeowners’ replacement cost, which is associated with the upkeep of a property and related to the price of new homes, rose in both Nova Scotia (+11.9%) and New Brunswick (+9.6%) in October.”