Statistics Canada reported that the Consumer Price index (CPI) increased 2.2% in February, compared to this time last year. Yet, the percentage is lower than the 2.4% year-over-year increase seen in January. According to Stats Can, excluding gas, the CPI increased 2.0% for February, the same rise seen in the previous two months. 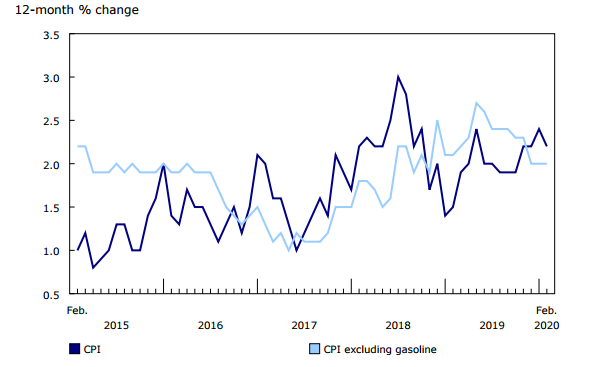 Seven of the eight major indexes saw increases with the shelter (2.3%) and transportation (4.4%) indexes seeing the largest price increases, over the past 12 months.

Over a 12-month span, gasoline prices increased less in February (7.0%), compared to January, which saw an 11.2% rise, year-over-year. Stats Can reported that this percentage decrease was due to the lower price of crude oil in the wake of the COVID-19 pandemic.

With regards to the effects of COVID-19 on Canada’s CPI, Statistics Canada stated that was keeping abreast of the fluid situation.

In February, several flights were suspended indefinitely in an effort to contain COVID-19. Although February airfares were collected prior to the suspension of flights, these prices were excluded from the CPI because passengers were ultimately unable to take these flights.

Since the beginning of March, further flight suspensions and travel advisories have been announced and various public events have been cancelled or postponed, which may lead to lower prices for travel services.

Crude oil prices have declined amid lower demand due to a slowdown in global economic activity and travel. Additionally, tensions between oil-producing nations are expected to lead to an increase in supply. These factors contributed to a price decline in early March, and could result in lower consumer gasoline prices in the coming months.

Because of these factors, as well as supply chain disruptions for consumer goods, temporary closures of some stores and service providers, the recent lowering of interest rates and the recent slowing of economic activity, the price effects of the outbreak could be more deeply felt in subsequent months.” 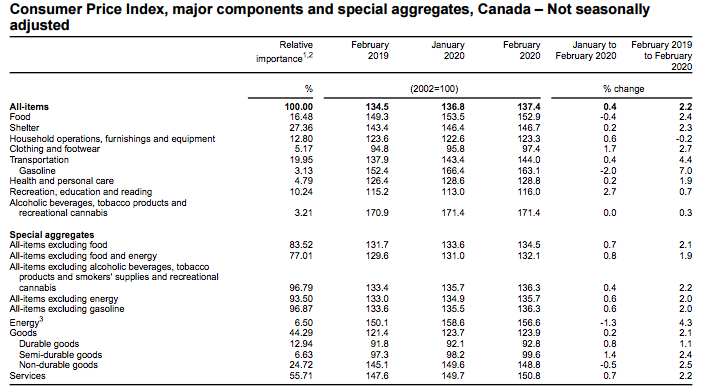 On a seasonally adjusted monthly basis, the CPI edged up 0.1% in February, which was the same rise seen in January.