Prices rose slightly more than expected in June according to the inflation report released today by Statistics Canada. The Consumer Price Index (CPI) climbed 0.2% in June, lifted by higher shelter and transportation costs. Year-over-year, the headline index climbed 1.5%, with every major component increasing despite falling energy prices. The aggregate index for energy fell 4.4% over the 12-months ending in June, compared to an annual decline of 3.6% in May.

The yearly inflation rate for June was unchanged from May. The all-items index excluding food and energy and the Bank’s core index were both up 0.2% after seasonal adjustments in June, basically unchanged from May. On an annual basis, both indexes were up 2.1% in May and June. 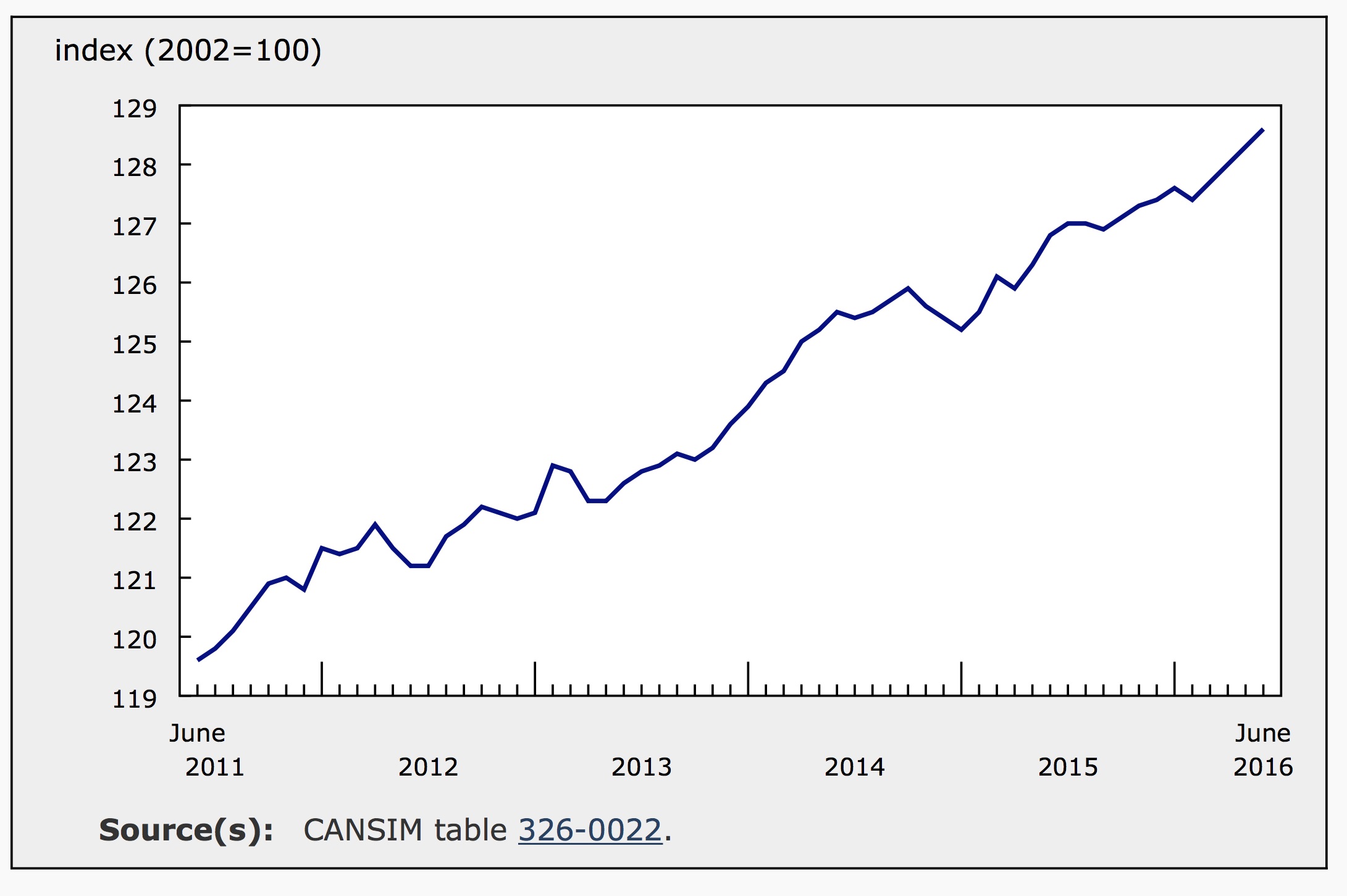 The food index fell 0.3% in June, the fourth consecutive month of declines in food prices. Food purchased from stores also declined for the fourth straight month, down 0.5%. Prices were down at the grocery store mostly due to declines in the prices of meat and dairy. On the other hand, the vegetable index added 1% in June after falling 4.4% in May. The index for food purchased from restaurants inched up 0.1% in June – this index has not posted a monthly decline since September 2010.

Transportation prices grew for the fourth month in a row, up 1.2% in June and 1.3% in May. Prices at the pump increased 4.3% in June and 4.1% in May. The Bank of Canada’s core index, which eliminates goods and services with volatile prices to help analyze underlying price pressures, was flat in June after increasing 0.3% in May. However with seasonal adjustments, core inflation was 0.2% in both May and June.

Household operations, furnishing and equipment increased 0.2% month-over-month, partly due to a 0.8% jump in the price of household equipment. The index for recreation, education and reading added 0.3% in June as jumps in travel costs (+1.9%) and in the price reading material (excluding text books) (+2.6) more than offset declines in recreational goods and services.

The index for clothing and footwear tumbled 2.0% in June after remaining flat for two months. Declining prices within this component of the index were not limited to any particular items. Health and personal care costs also slipped in June, down 0.1% after increasing by that amount in May. While the subindex for healthcare was flat, the price of personal care products declined by 0.4% and the personal care services index was flat.

Acceleration in the indexes for shelter, for clothing and footwear and for health and personal care offset declines in the rate of growth of the food index, and the index for recreation, education and reading. The increase in the all-items index was driven largely by a 2% jump in the price of household operations, furnishings and equipment. More specifically, services within this household index were up 5% year-over year. Household furnishings and equipment were also significantly higher, up 2.8% over 12-months. 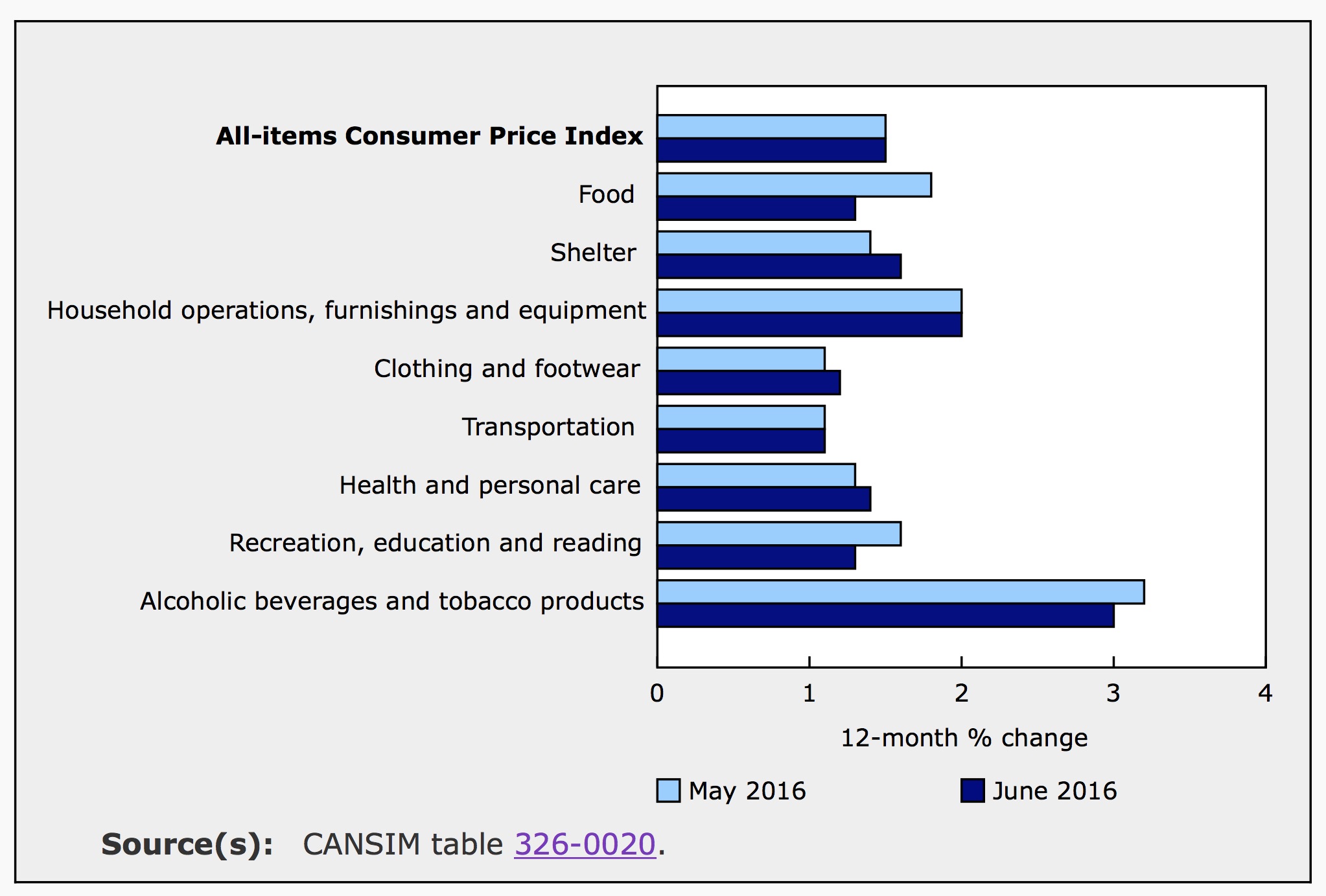 The clothing and footwear index grew a modest 1.2% from a year earlier. Within the index, the cost of jewelry had the largest increase, up 7.5%. Similarly, the index for recreation, education and reading added 1.3% over the year. Travel services were 2% cheaper while the index for reading material was up 7.1%.

The food index, which accounts for about 16.4% of the CPI gained an annual 1.3% in June versus 1.8% in May. The price of food purchased from restaurants was up 2.6% and countered meagre growth in grocery store prices. At the grocery store, the price of fish jumped 6.6% year-over-year in June compared to 5% in May. Fresh fruit and vegetables were also significantly more expensive than a year earlier, up 6.1% and 3.7% respectively. In May, the fresh vegetable index gained 1.9% and the fruit index was up 4.9%. Prices for meat and dairy products declined year-over-year.

At their most recent meeting, the Bank of Canada left rates unchanged, as was largely expected. Today’s report did not contain any big surprises and is unlikely to impact the current thinking on future rate changes – there are unlikely to be any changes this year. The Bank meets again on September 7th. While low rates will fuel the already hot housing market in Canada (a major source of underlying inflation over the past year). Higher rates could be detrimental to the vast majority of Canadian with high levels of debt and mortgages.