According to Statistics Canada, the Consumer Price Index rose 0.2% in October after seasonal adjustments. This reverses September’s 0.2% decline in consumer prices. Annual inflation for the year ending in October was 1.0%, well below the Bank of Canada’s target of 2%. 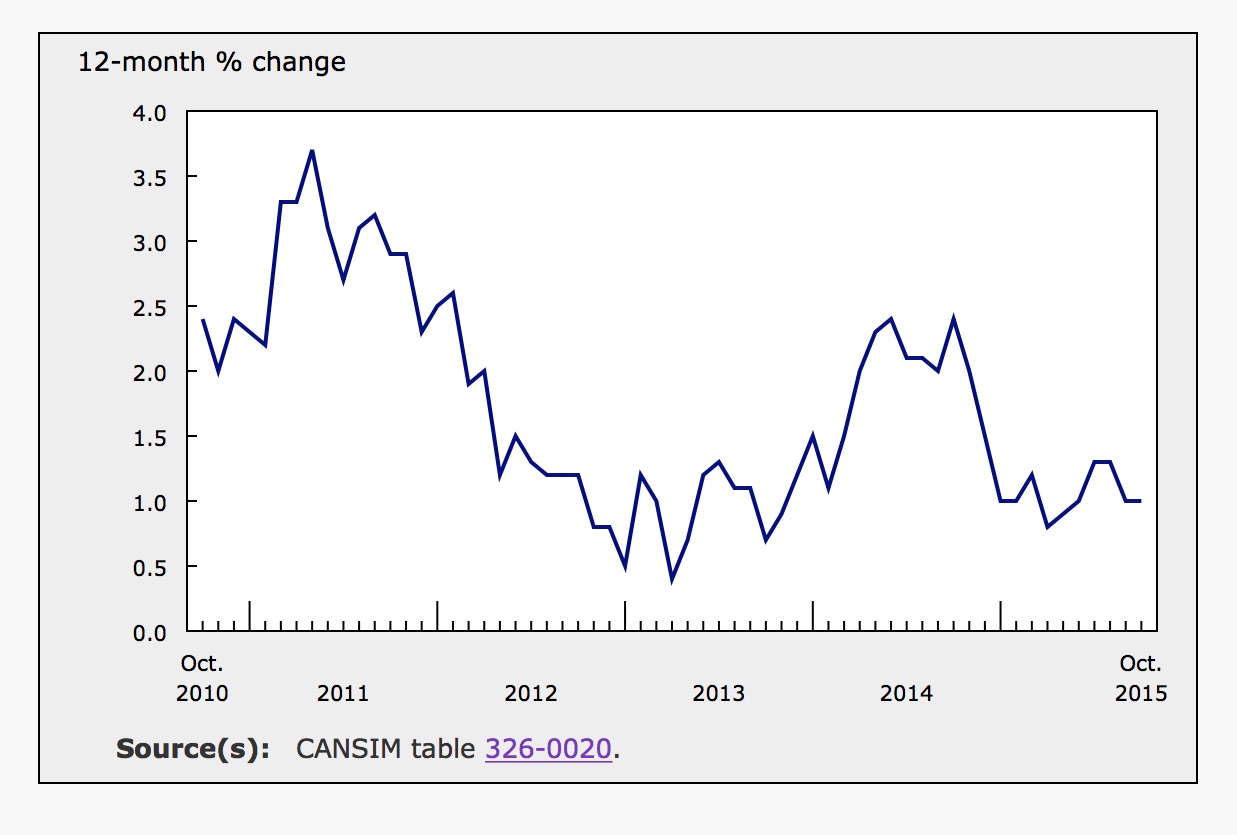 The Bank’s Core Index, which excludes volatile items like food and energy was up a seasonally adjusted 0.2% in October following an increase of of 0.1% in September. The Core Index climbed 2.1% for the years ending in October and September.

Consumer Prices climbed a seasonally adjusted 0.2% in October. Inflation for the month was driven by higher food prices, up 0.5%. The indexes for shelter, transportation and health and personal care also increased in October, while the index for recreation, education and reading was the only component to post a monthly decline. The other indexes remained unchanged.

Higher  food prices were driven by a significant spike in the cost of fresh fruit, up 3.8% before seasonal adjustments. Meat was also more expensive in October versus September, climbing 1.1% over the month and led by a 2.0% increase in the price for processed meat. The index for dairy products also jumped 1.1% in October. Grocery store bills were 0.5% higher according to the index for food purchased from stores.

Shelter costs rose 0.3% in October, which was the result of the index for property taxes and other special charges posting a 3.0% spike for the month. This index has not posted any changes since October 2014. The two indexes for home maintenance and repairs grew in October with tenants’ maintenance, repairs and other expenses up 0.5% and homeowners’ maintenance and repairs up 1.1%. Both of these indexes fell 0.5% in September. The index for water, fuel and electricity, down 1.4% in October, helped curb shelter costs. The decline in this index resulted from a one-month, 7.4% fall in natural gas prices.

The index for health and personal care, up 0.2% in October on a seasonally adjusted basis and flat before adjustments, reflects a large spike in the index for other health care goods, up 3.5% for the month. Soap and oral-hygiene products posted large gains as well, up 3.6 and 2.2% respectively.

For the month of October, British Columbia was the only province to post a decline in consumer prices, down 0.3%, largely due to a steep decline in the index for recreation, education and reading, down 2.7% during the month of October. This includes a 14.3% fall in the cost of travel services in the province.

The Bank of Canada’s Autumn Review asks the question: ‘is slower growth the new normal in advanced economies?’

“Overall, there is increasing evidence that growth in advanced economies may remain slow in the immediate future compared with its pre-crisis average, as a result of a combination of cyclical and structural factors…[however,] monetary policy-makers still have ample room to manoeuvre [and] should be able to support both potential growth and aggregate demand.”

In a recent press release, the Bank of Canada announced plans to consider alternative stimulatory monetary policy such as quantitative easing and negative interest rates. These tools will be considered when the bank revisits their target interest rate next year.