“This was the largest increase since January 1991, when the goods and services tax was introduced,” explained the agency in its monthly report.

“In March, Canadian consumer prices increased 6.7% year over year, one percentage point higher than the gain in February (+5.7%). This was the largest increase since January 1991 (+6.9%). Inflationary pressure remained widespread in March, as prices rose across all eight major components. Prices increased against the backdrop of sustained price pressure in Canadian housing markets, substantial supply constraints, and geopolitical conflict, which has affected energy, commodity, and agriculture markets,” the agency continued.

Stats Can also touched upon employment in its March report.

“Further, employment continued to strengthen in March, as the unemployment rate fell to a record low. In March, average hourly wages for employees rose 3.4% on a year-over-year basis. Excluding gasoline, the Consumer Price Index (CPI) rose 5.5% year over year in March, the fastest pace since the introduction of the all-items excluding gasoline special aggregate in 1999, following a 4.7% gain in February.” 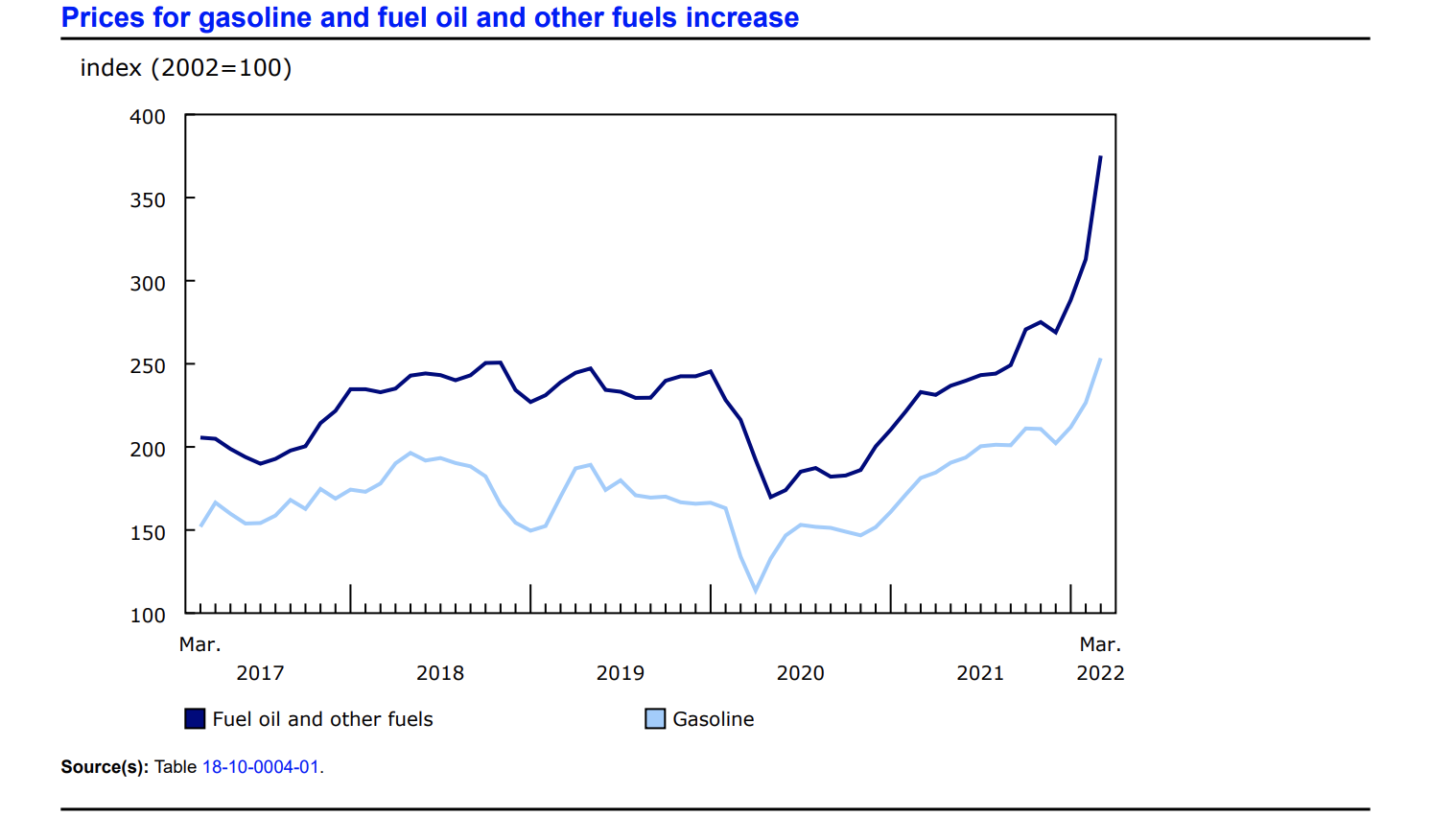 Over the last 12-month period, the price of gasoline rose 11.8% on a monthly basis.

On a year-over-year basis, the food index increased 8.7% in March, with a couple variables being contributing factors.

“Shoppers paid 8.7% more for food purchased from stores on a year-over-year basis in March, up from a 7.4% increase in February. This is the largest yearly increase since March 2009. Increases in input prices and transportation costs continued to put upward pressure on grocery prices.

Prices for dairy products and eggs rose 8.5% year over year in March, following a 6.9% increase in February. This is the largest yearly increase since February 1983. Price growth for butter (+16.0%), cheese (+10.4%) and fresh milk (+7.7%) contributed to the gain. The Canadian Dairy Commission implemented changes in February 2022, which put upward pressure on dairy products and butter prices.

Prices for pasta products were up 17.8% on a year-over-year basis in March, the largest increase since January 2009. Similarly, breakfast cereal and other cereal products (excluding baby food) increased 12.3% year over year, the fastest pace of price growth since June 1990. The increases occurred as prices for wheat futures reached a 14-year high in the context of the conflict between Russia and Ukraine, two major wheat exporters. Prices for fertilizer, a key input in wheat production, were elevated prior to the conflict in Eastern Europe, due, in part, to higher energy prices,”  said Statistics Canada. 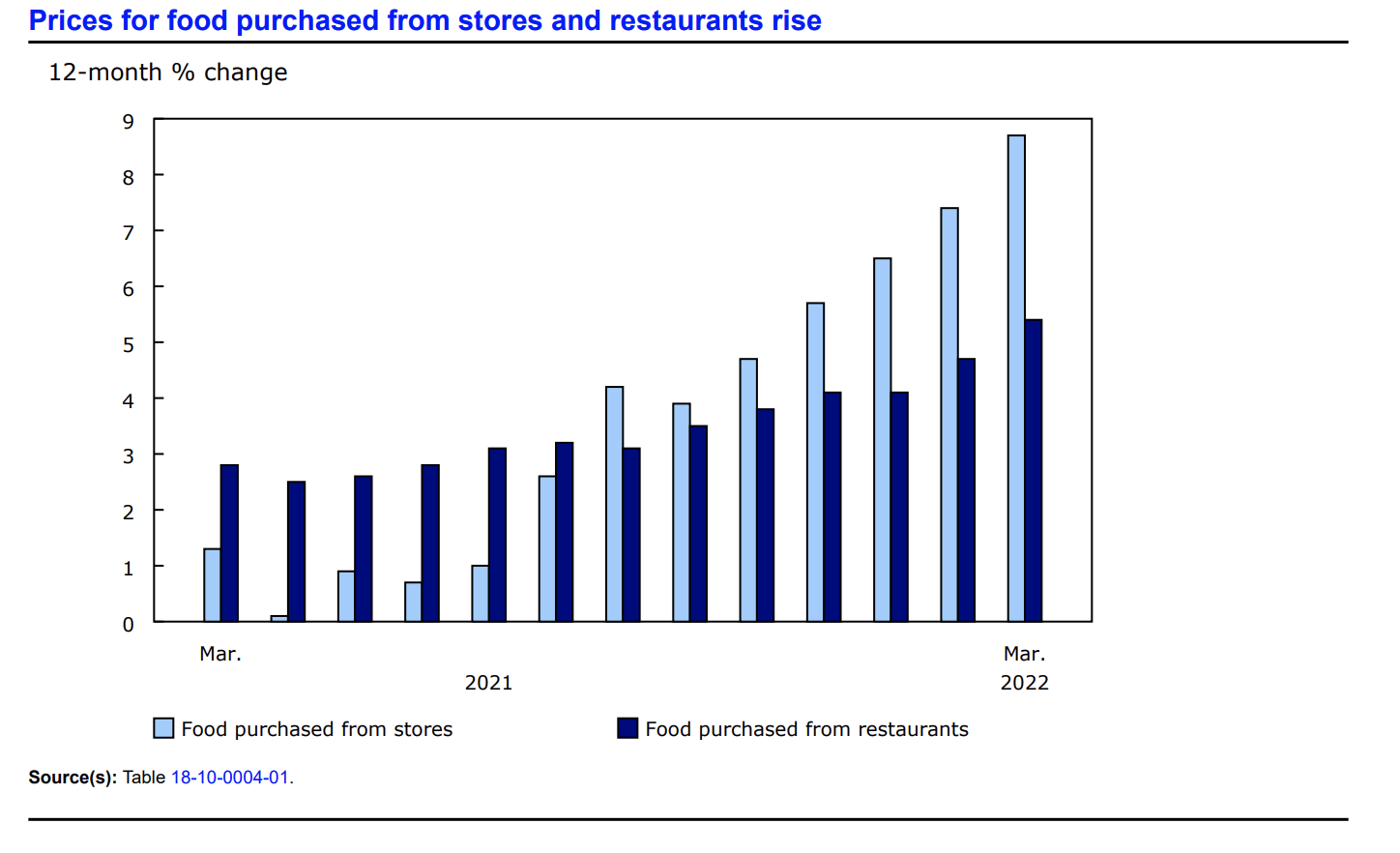 Statistics Canada released a statement regarding an update for the CPI basket for June 2022.

“The CPI is based on a fixed basket of goods and services designed according to international standards and methods. On June 15, 2022, updated basket weights for the goods and services used in the calculation of the CPI will be made available in table 18-10-0007-01. The new basket weight reference period will be 2021, based on the most recent national household final consumption expenditure data. Alternative data for 2021 will be used to account for pandemic-related shifts at more detailed levels of geography and within the various CPI components. The methods and data sources used will be similar to the last basket update in July 2021.

One week later, on June 22, the May 2022 CPI will be released, based on the updated basket weights.

For the latest analysis of evolving consumer expenditure patterns during the pandemic recovery, see the Adjusted price index, which has provided a complementary measure of consumer price inflation based on a more timely set of national weights from alternative sources of expenditure data, such as those from the Bank of Canada. Going forward, and to ensure an even greater degree of relevance, Statistics Canada will move towards annual basket updates based on the most recent household expenditure data.”