Friday StatCan released the Consumer Price Index (CPI) numbers for March. Year-over-year, Canada’s CPI was up 1.2%. Prices rose broadly across much of the economy, offsetting a major decline in gas prices. Economists had expected inflation to remain at 1%, in line with the 1% rise in prices over the year ending in February. However, strong core inflation, combined with two consecutive months of rising gas prices, led to higher-than-expected overall inflation. 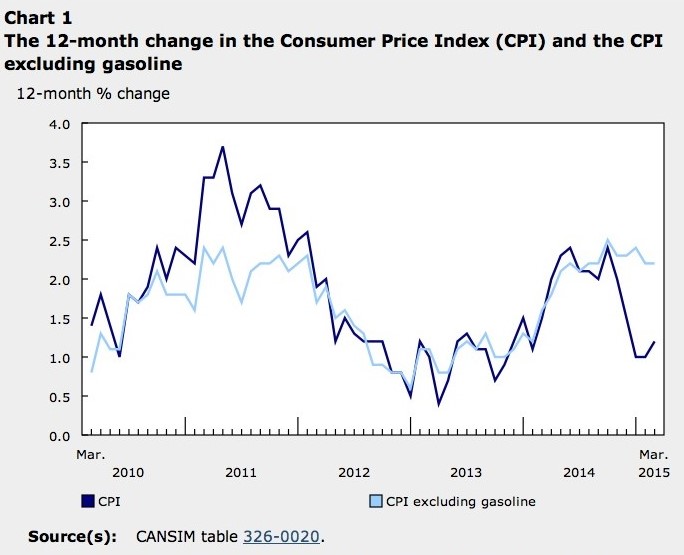 Core inflation is a useful indicator of underlying price trends because it eliminates goods and services with highly volatile prices from the CPI. This includes various food items, mortgage costs, energy, gas and tobacco prices. In March, core inflation reached 2.4%, the highest rate seen since December 2008. This is 0.3% higher than February’s core inflation number.

Saving at the Pump, Spending Everywhere Else

Plummeting gasoline prices in the second half of 2014 curbed inflation throughout the 12-month period ending in March. Transportation is the second largest component (19.1%) of CPI and is strongly impacted by the price of gas. The global dive in oil prices between June of 2014 and January of 2015 drove gas prices down over 35% in Canada. Subsequently, Canada’s gasoline price index (non-seasonally adjusted) has reversed its course, growing 9.4% in February and 6.3% in March. Overall transportation costs fell 3.9% for the year ending in March compared to 5.0% for the year ending in February. Falling annual transportation costs for five consecutive months have buffered Canadians from rising prices in other areas of the economy.

Canadians felt the pinch at the grocery store as the price of ‘food purchased from a store’ grew 4.2%. Overall, food prices rose 3.8% for the year ending in March. This was driven by a drastic rise of 11.8% in the price of meat, and the price of fresh fruit and vegetables, which increased by 2.1% and +6.4% respectively. Since food accounts for over 16% of consumer spending, much of the money saved at the pump, was spent on food. And any remaining savings likely went towards household operations. ‘Household operations, furnishings and equipment’ make up another large component of the CPI (13.1%) that experienced significant inflation over the yea ending in March.

It is estimated that the declining loonie has boosted inflation by between 0.6% and 0.7%. We have seen the most significant price growth in sectors that are reliant on imported goods such as food and household equipment.

Eight provinces saw prices rise over the 12-month period ending in March. Ontario, which accounts for nearly 40% of Canada’s CPI, experienced the strongest inflation with prices rising 1.6%. Natural gas prices rose almost 26% in Ontario during an unusually harsh winter. On the other end of the spectrum, Alberta, saw a marginal decline in overall price levels year-over-year. This decline was driven by a drastic fall in natural gas prices in the province; they fell by 42%. PEI was the only other province to experience a decline in prices.

At 1.2%, we are still well below the Bank of Canada’s 2% target rate of inflation and dangerously close to the bottom of the target’s range, which is between 1% and 3%.

Economic growth in the first quarter of 2015 is expected to be lackluster (first quarter GDP numbers will be announced April 30th). Stephen Poloz, governor of the Bank of Canada, expects the negative impact of oil prices will be largely concentrated in the first quarter of 2015. However, March’s unexpected inflation coincides with surprisingly strong retail sales figures in February. These indicators point to stronger economic growth in the second half of 2015.

According to Poloz, inflation is expected to be closer to its target by the beginning of 2016, mostly due to anticipated weakness in the loonie. On April 15th the Bank of Canada announced that it will leave its overnight lending rate at 0.75% and implied that further rate cuts are unlikely in the foreseeable future.