In order to maintain our standards of living, wages must grow as fast as prices rise. Otherwise, inflation eats away at our wages and we lose purchasing power. Fortunately, most Canadian provinces have recently started to link their minimum wage to inflation. British Columbia will be the last province to use a formula that includes changes in provincial price levels to determine annual increases in the minimum wage.

The dynamic relationship between wages and inflation is known as the wage-price spiral. Wage push inflation occurs when, for one reason or another, wages increase. Wages are a large portion of most business’s costs so higher wages eventually lead to higher prices. Higher prices eat away at real wages until, once again, higher wages are demanded and the cycle begins again.

The wage that we see on our paycheck is a nominal wage; it is not adjusted for inflation. Nominal wages are said to be sticky or sticky down. This means that they can adjust upwards relatively easily but do not often adjust downwards. Most employers believe that reducing wages rather than laying-off employees, undermines worker’s moral and productivity. This means that during an economic downturn, while demand for labour is reduced, wages are stuck at an inflated level and businesses must lay off workers to reduce costs.

The graph below shows how Canada’s nominal average hourly wage grew steadily between 1998 and 2013. It does not capture changes in worker’s actual well-being because it does not tell us anything about price levels. It is interesting to note the steady increase in nominal wages over periods when unemployment was on the rise and economic productivity was slowing, particularly between 2008 and 2010 when Canada’s GDP per capita actually fell. Note: The chart shows two different measures of average nominal hourly wage, the Labour Force Survey and the Survey of Employment, Payrolls and Hours.

The next graph shows inflation adjusted or real wages over the same period and tells a different story. Growth in real wages has not been as consistent as growth in nominal wages. Since the economic crisis of 2007, wage-earning Canadians have mostly enjoyed increasing purchasing power. It appears that Canadians that did not lose their jobs in the most recent economic downturn actually enjoyed growth in their real wages throughout the period.

This masks a longer-term trend of stagnation and declining real wages across Canada; in fact, inflation adjusted wages in 2013 were almost identical to wages in 1975 – just over $10/hour (in 2013 dollars).

The Problem of Unemployment

Overall, Canadian wages have not been drastically eroded by inflation since about 2003. In fact, we have seen that low inflation has benefited wage earners. However, over the same period, many wage earners were losing their jobs. The graph below shows unemployment spiking rapidly during 2008 and 2009, a period that saw real wages climbing sharply. 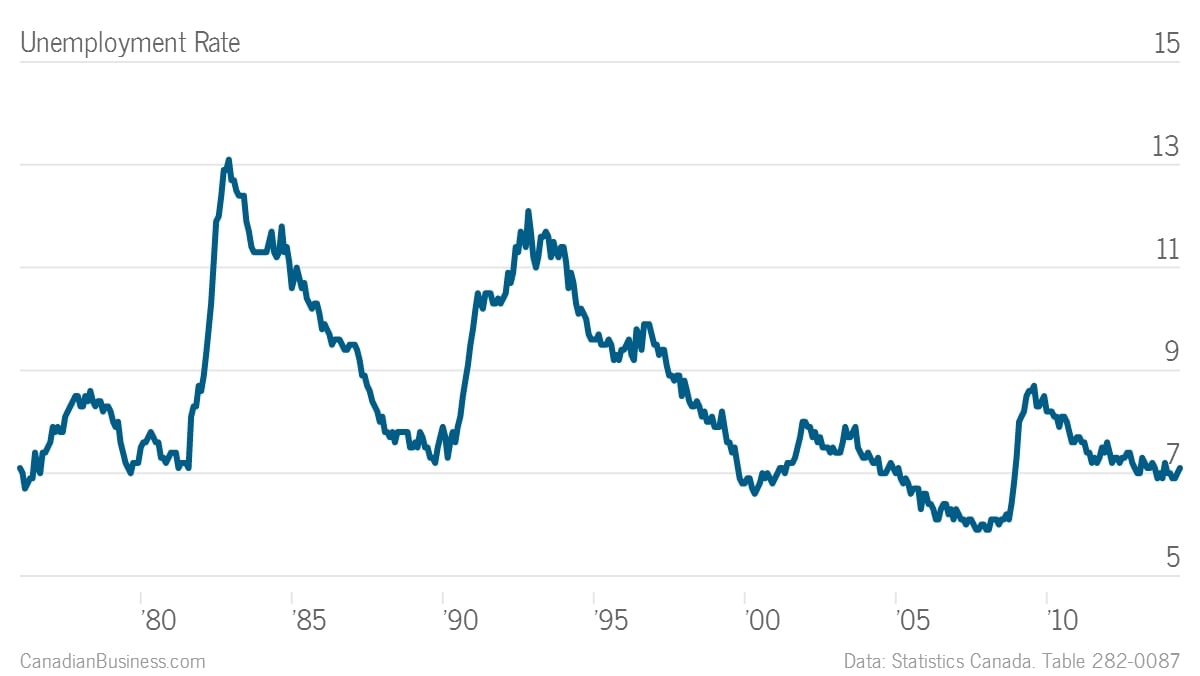 The Phillips Curve is an economic model that defines an inverse relationship between unemployment and inflation. In effect, if unemployment is low, the labour market will be competitive and wages will rise, creating inflation as higher labour costs are filtered through to consumers. At the same time, high inflation reduces real wages and businesses will want to hire additional workers, reducing unemployment. Low inflation, as we are currently experiencing, increases real wages, which keeps unemployment high.

The Canadian Central Bank’s decision to reduce its overnight benchmark rate on January 21st  was aimed at stimulating economic growth and warding off deflation, particularly in the face of plummeting oil prices. If it is successful, real wages are likely to fall and working Canadians might not be as well off as they are currently. However, more Canadians are likely to have jobs. Because nominal wages are sticky downwards, inflation is sometimes necessary to reduce real wages and bring the labour market closer to its equilibrium, where full employment is achieved. Whether policy will be successful in stimulating inflation remains to be seen.

What the Lower Loonie Means for Real Wages

The Canadian dollar has fallen sharply since the government softened its monetary policy in January. This means that we will be paying significantly more for imports, on which we are heavily reliant as consumers. According to Gordon (Macleans, 2014), the Bank of Canada’s policy is based on the belief that real wages are too high to allow the economy to fully recover from the last downturn. A declining currency conveniently reduces real wages across the board. Our flexible currency is a useful mechanism that automatically corrects inflated real wages so that we can remain globally competitive.

What Canadians Can Expect This Year

According to The Conference Board of Canada’s annual compensation outlook, Canadians can expect to enjoy a modest increase in real wages in 2015. Most Canadian employers expect to marginally increase base salaries this year (2.9% for non unionized staff and 2% for unionized staff), despite modest expected economic growth. These wage hikes are slightly higher than expect inflation, which is only 1.9%.