Canada has been known for being one of the most financially stable countries in the world, and this rings especially true since Canada is one of the only countries that came out rather unscathed from the 2008 recession. Although we’re known to be one of the most financial sound countries there’s a problem brewing in the shadows, and it’s something that might jeopardize our financial security. The financial stability of Canada is being threatened by the plummeting oil price, which is directly affecting the value of the Canadian dollar. Stephen Poloz (Bank of Canada Governor) made sure to cut key interest rates by 25 basis points (leaving it at 0.75 percent) in an attempt to stabilize the economy, but analysts are already foreseeing more cuts and additional measures to reinvigorate the Canadian economy…

There are clear cut winners and losers when it comes to a situation like this one, and we’re going to go through them. Not only will it let you know where people are flourishing because of a drop in the Canadian dollar, but it will also show you those who are suffering because of it. 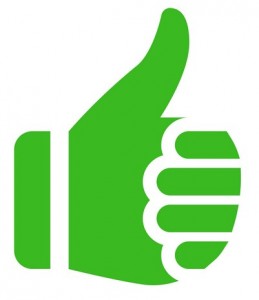 Interest rates that are constantly rising will always have an impact on homeowners, if the rates get any higher it’s going to have a rather large affect on marginal borrowers.

Whenever the borrowing rates are at their highest people aren’t going to want homes, therefore the housing demand will be lower (therefore putting a lower price on your home/property).

This particular rate cut can mean that the lower mortgage rates people have been searching for will come to fruition, therefore there will (most likely) be a large collection of borrowers running into a brick wall at some point.

The oil patch that Canada has been suckling on for such a long time has always been a cornerstone of our finances, but this is perfect for those who are in the industry of manufacturing. The cost that comes along with manufacturing your goods includes all of the energy you’re using, and lower oil prices means that energy itself will be “cheap” (in a sense, let’s not get too hasty here). The fact that the loonie is falling means competition will be intense throughout the market, and that’s great when it comes to the amount of money being spent through market investments.

Have you ever driven over the border to fly out of the United States? It’s something that people do in order to save a few bucks on their flight, and sometimes it can actually save you a lot more money than you would anticipate. Thanks to a lower loonie Canadian Airports have seen an increase in activity, as the fuel is cheaper and since it’s much more expensive to park and such in the US (due to their increased strength in currency) people just fly from home.

Stockholders and banks will be laughing until they can’t anymore, mainly because they’re completely protected from all of this stuff (not all of them of course). When there’s a period of lower rates the stocks and those who have equities will be in great hands. Policy rate reductions will also call for Canadian investors to take broader risks, because the benefits they might come out with are too high to say no. Lower bond yields would have them scrambling and looking for something that will make automatic returns, but this oil problem in Canada should leave stockholders in the perfect position.

Some banks would lose out in this situation, the perfect example being TD Canada Trust; they refused to acknowledged the rate cut and will be moving forward on their own terms.

If you’re being paid in USD as a professional athlete you’ve probably got a lot to smile about, not only are you making millions of dollars but you also have the ability to have even more when you come over to Canada. The United States dollar is stronger because of how weak our currency is right now, and as a result professional athletes will technically be making a lot more money than they initially were (in the previous years that is, although their salary is probably the same the dollar is worth more at this time).

Cheaper oil rates means that the cost of fuel for your vehicle is going to be lower, although it still mght cost you a pretty penny it’s less than it was before! You can’t say no to cheap gas, that’s something you really just don’t miss out on. It’s still cheaper to do it wen you’re in the United States, but we’ll take what we can get.

Those who live in the USA will be able to come into Canada and live like kings (figuratively, of course), as they’ll be able to make use of their incredibly strong currency in our country. They can do a lot more than they would be able to back home here, and they would also be spending smaller amounts of money. This means the tourist attractions of Canada like the Rocky Mountains and even the CN Tower will be littered with people from the United States, and that’s fantastic for the tourism industries economy.

NOTE: Here’s a graph pertaining to the value of a Canadian dollar (over the course of 5 years) 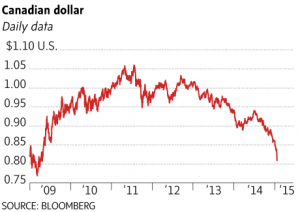 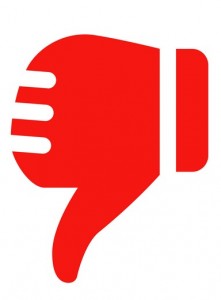 viously the loonie itself is going to lose out, Canada has always been known for having weaker currency but it’s never been this bad. The dollar could fall as low as 77 cents when going up against the United States Dollar (USD). As of now the Canadian dollar is hovering around 78 (0.78) cents per USD, and that’s one of the lowest exchange rates that we’ve seen in the last few years.

You’ve always got to make that currency exchange when you’re travelling, and this means while our currency is weakening the travelling plans that you may have put together could fall apart. You’ll need to convert your CAD into another type of money in order to make the most of it, and when the exchange rate is this low you’re not going to get as much money as you normally would. Not only does this mean you’re going to pay a lot more money, but it also means that people simply aren’t going to want to leave Canada.

Seeing as your rate can’t fluctuate due to it being fixed this isn’t news that you want to hear about, as a rate cut means you’re going to miss out on the savings this particular cut would have to offer. Canadian lenders are always making decisions, and if they decide to lower their mortgage rates than you’re still going to be stuck paying the same old premium you’re used to.

When you live in Canada hockey is going to be a pretty large portion of your life, and that’s whether you like it or not! It’s everywhere and it’s the national sport of our countrymen, and that’s why a lower loonie is going to bring them into tough times. All of the team revenue is accounted for in CAD, which means that when our currency is weaker they’re going to be dealing with a lot of financial stress. As if the season wasn’t enough they’ve also got to deal with the fact that they’re teams revenue is leaking out funds, it sounds terrible as soon as the though comes into mind.

You wouldn’t think that oil prices would have an affect on the cost of produce in grocery stores, but that’s exactly what’s going on here. As our currency gets weaker it becomes harder to import goods, and since Canada isn’t exactly prime location for growing agriculture we’ve got to bring a lot of it in. The prices can get incredibly high in the winter seasons within Canada, but that’s the price we’ve got to pay for needing bananas.