Ben Bernake, former chairman of the Federal Reserve, has famously said that ‘no one really understands gold…including himself.’ You can’t eat or drink it or use it to build a shelter, it has very little practical value at all. Yet, its intrinsic value is one of the oldest agreements among humanity. Why gold? Gold is unique among the elements. It is rare, beautiful, strong and light yet malleable enough to make jewellery and coins that fit in our pocket. It is also a powerful and efficient conductor of electricity and most electronic devices, from cell phones to television sets, contain small amounts of gold. The metal is also being used in various other sectors, including medical devices, dentistry and architecture.

Over 2,500 years ago, from the city of Sardis in ancient Lydia, which is now central Turkey, King Croesus is thought to have issued the first gold coins into circulation. Bullion coins, those made purely from precious metals, have an inherent value that is largely immune to inflation. However, it did not take long for ancient rulers to discovered that by adding small amounts of lead or other “base” metals to their gold, they could increase their wealth and the wealth of their kingdom, at least temporarily. Thus began the process of debasing currency and inflation was born.

Today, the world’s supply of gold is pretty much fixed. Mining operations only increase supply by 1-2% annually. While the increasing demand for gold in the industrial production of electronics slowly diminishes supplies.  In the 1700’s, vast amounts of gold discovered in South America led to a drastic decline in its value and hence a huge increase in the cost of everything else. Since then, the world’s supply of gold as remained fairly stable and changes in its price result mostly from changes in demand

In the early 20th century, most of the world’s currencies were still backed by gold. Gold was traded as a currency and not a commodity – which it is largely viewed as today. Financing the World Wars forced most of the world, including Canada, to abandon the gold standard.

However, the U.S. uniquely maintained its gold standard throughout the wars. Thus, U.S. dollars became the world’s currency reserve. They could be traded for gold at an arbitrarily fixed rate. The price of gold was impacted only by the exchange rate with U.S. dollars. This quasi-gold standard was not sustainable.

In 1933, at the peak of the great depression, President Roosevelt forced U.S. citizens to sell all their gold to the government at its artificially low, fixed price. The gold was then revalued, nearly 70% higher, to reflect global inflationary pressures; the rest of the world had already begun printing fiat money, backed only by a collective trust in the government.

Roosevelt’s solution was only temporary and impossible to repeat. With none left to confiscate, Nixon abandoned the gold standard in 1971. Allowed to trade freely and no longer currency, the price of gold surged over the next decade, largely on speculation. Canada’s inflation rate soared with the price of gold but remained high while the price of gold corrected itself in the 1980’s. After that, both inflation and gold experienced over 20 years of relative stability. September 11th, 2001 sent the price of gold to new levels, while inflation remained quite low.

Gold as a Commodity

No longer a legal currency, gold is now traded like a commodity. This means that a complex market of derivatives has evolved. These markets are highly sensitive to headline news and the formulation of expectations. So, what drives changes in the price of gold?

Gold has often been sought after as a hedge against inflation. However, there is very little evidence that holding gold protects us from short-run inflation. While gold and inflation have periodically moved together, the relationship is not clear-cut. According to Adrian Ash, a researcher at the Bullion Vault, there was no correlation between the price of gold and inflation over the past 45 years. 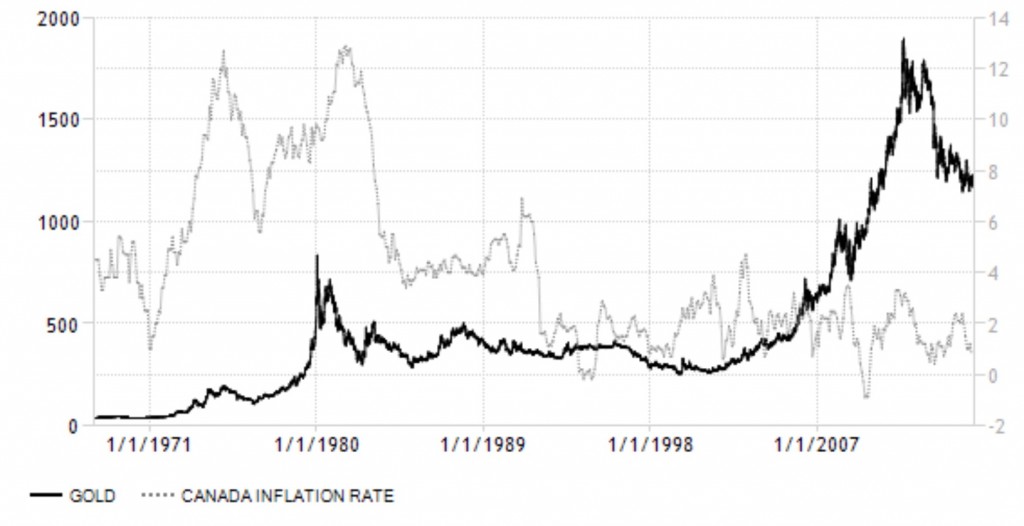 Gold acts more as insurance against large-scale economic failures, particularly run-away inflation. Declining faith in the system increases demand for gold – fears that markets will collapse or governments will default. Because gold itself is not a productive asset, it potentially has high opportunity costs. When we do not have faith that the economy can provide opportunity, gold becomes a safe store of value.

Because we don’t earn interest or dividends on gold, high rates of return on alternative investments like stocks and bonds increase the opportunity cost of holding gold. Theoretically, the price of gold should move in the opposite direction of these investments. When interest rates are high or the stock market is booming, investing in gold is more costly. However, very little correlation exists between the price of gold and interest rates or stock returns.

The price of gold is highly sensitive to political instability. For example, gold spiked in 2011 as civil war erupted from the Arab Spring revolutions. It reached an all-time high after the September 11  2001. However, these moves in the price of gold are often short-lived and caused by speculators trading gold derivatives and reacting to headline news.

Gold’s inherent value is still alive today. In the face of global uncertainty, an increasingly complex world and shifting economic powers, owning some gold is not a bad idea. The price of gold spiked this week on news that the U.S. Federal Reserve was not in a hurry to continue raising interest rates. The price of gold is largely an indication of political and economic anxiety.